For the general case of applying a filter between some signal source and load point, the solution space is constrained when the design is limited to only resistors and capacitors. For the sake of discussion, consider the schematic below. Here the signal source \(V_S\) has an output resistance of \(R_S\) and the filter is loaded by the input input resistance of the proceeding signal stage.

When the source resistance is significant, only an additional capacitor is required.

Under these source and load conditions, a common implementation of an RC low-pass filter is shown in the figure below

In the idealized case, the RC low-pass filter has two passive components, namely, a resistor and a capacitor. The series resistor \(R\) is an ideal resistor (not a high-frequency lumped element RLC model), which has a constant resistance across the frequency spectrum. The shunt capacitor \(C\) has an impedance which decreases with increasing frequency. Low-pass filtering occurs due to the declining impedance of the capacitor with frequency, which progressively shunts more and more current to ground as frequency increases. Ultimately as the signal frequency continues to increases, capacitor C, appears as a short to ground.

The easiest solution for the transfer function of \( V_O/V_S \) is realized treating the RC network as a voltage divider. Substituting the component designators R and C for their impedance \(Z_R\) and \( Z_C\) respectively is shown on the figure below. 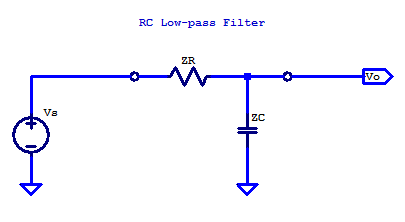 The transfer function is then simply

H(s) is a unity gain, single pole transfer function, with its pole at

The -3 dB corner frequency is